The World Premiere – Viagara Falls – Sweeten Up! – sold out 5 performances!

It had FIVE SELL OUT SHOWS and a rave review in Stage Whispers (Australia and New Zealand’s monthly theatre magazine – May/June 2019 edition) and the Gold Coast Bulletin (weekly magazine – 21 March 2019). 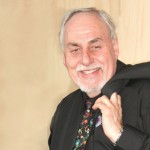 Scots born and educated, Canadian Theatre trained and Australian citizen since 1976,  Alan Youngson has been involved in and employed in the performing arts for 50 years including: Character Actor in 40 plays | revues; Director | Producer of 54 shows (plays, musicals, opera, concerts and revues ) including Canadian Premiere of Abelard and Heloise | 5 years as Executive Producer, Brisbane Warana Festival including 27 River Stage shows (each with 10000 patrons) from bands to ballet, multicultural to musicals, orchestras to operas with the cream of Australian talent.

22 years as a Drama Teacher, Speech Coach, Trainer and Arts Consultant as well as 20 years as Artistic Director/Manager of Theatres/Performing Arts Centres in Niagara Falls, Geelong and Brisbane.

Recent theatre achievements include Queensland, Australia premieres: In 2016, he co-devised “Adventures Before Dementia!” starring the Two Merry Geriatrics and The Babbling Trillbillys. In 2019, Alan directed, produced and performed in the world premiere of Viagara Falls – Sweeten Up! which he co-authored with Janet Findlay.

Local Ipswich actress and comedienne Janet Findlay is best known for her impersonation of Queen Elizabeth. With a career spanning over 40 years, Janet has performed in Australia, New Zealand and the US, and once had a play staged at the Edinburgh Fringe Festival.

Janet is also well-known as half of the lively music/ comedy duo The Babbling Trillbillys. With singer Joy Winnel, she wrote lyrics for and performed in three successful shows at Studio 188, Ipswich as well as entertaining in Seniors’ clubs and Retirement facilities throughout South East Queensland.

With Viagara Falls – Sweeten Up, Janet has tried her hand at playwrighting comedy and farce for the first time and has enjoyed taking on the challenges of the genre and working with Co-Author, Actor, Director and Theatre Manager, Alan Youngson.

In 2016 Janet and Alan previously collaborated , wrote and performed in the revue show, Adventure Before Dementia! starring The Two Merry-Geriatrics and The Babbling Trillbillys!